Live Streaming even while Taking over the Provincialship!

Corona is making our life really difficult especially in India with its number of infection rates scaling high reaching almost to number one of the global tally.  However, with the technology at our fingertips we can use this challenge as an opportunity. This is what happened on the 26th September 2020 in Bangalore (KAR), India when the change of Provincial took place. P. Stanislaus D'Souza who is now appointed as the Provincial of South Asia (POSA) handed over the charge of Provincial of Karnataka Jesuits to P. Dionysius Vaz.

As a number of Jesuits of Karnataka were infected with corona and majority of them being members of younger generation, handing over the Provincialship which usually brought together a  seizable number of Jesuits at one place this time was restricted only to a few. However, we thought of uniting the whole Province and our collaborators through a live streaming of the Eucharist and the felicitation program. KAR province has 307 Jesuits with 227 of them below the age of 49. And the median age of the province members is 35 years. Jesuits watched the live streaming either on a big screen at the community level or individually who felt that best suited for them. Many expressed a great satisfaction at the program saying, "we felt as if we were at Loyola Mandir witnessing the event of handing over." Here is the link: https://www.youtube.com/watch?v=bIz2w6ihR7o&t=170s

The above news is published in four languages, namely, French, Spanish, Italian and English on the website of the global Society of Jesus in Rome - https://www.jesuits.global/ on 07th October 2020 with a title, CREATING UNITY IN KARNATAKA IN TIMES OF COVID. Below are the snap shots. 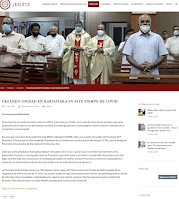 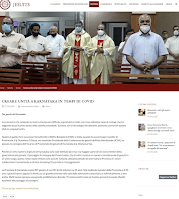 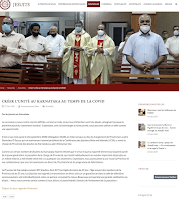 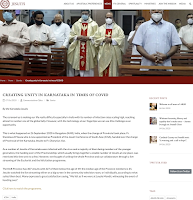 Hearty congratulations dear Olvin! As I witnessed the whole program, it's my pleasure to share that the program was heavenly and it remains as a great landmark in the history of your Province and Society as a whole. I was spellbound at the well arranged rhythemic celebration that seems to be uniting the heaven and earth. The words fell from the hearts of all the creators of Jesuits Society inspired me. The celebration is ever fresh in me right now and forever so... 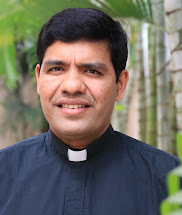